Andrew Warren’s future was with the Marines, until an IED took his leg and derailed his career. Now he’s flunking Fundamentals, and he enlists the help of his fellow App State freshman and off-campus neighbor, Sawyer Layne. It’s not just the beautiful blonde’s looks that intrigue him, but the hurt in her eyes.

Sawyer spends her days surrounded by numbers and nights with a bottle of vodka to numb the darkness of her past. Guys like sexy, tattooed Andrew are exactly what Sawyer needs to avoid. Look but don’t touch—that’s the rule. If only his eyes weren’t so blue, and his abs not so chiseled….

When Sawyer resists his brand of charm, Andrew uses every devious tactic he knows to pull her from her shell. Falling in love was never part of the plan.

Sawyer’s hands slid down his shoulders, past his chest, and back up. She knew what came next, but how to get there was another story entirely. Once again, he read her mind, and, chuckling to himself, kissed a path along her throat, his hands taking a different route to her breasts. His soft lips contrasted with the scruff of his beard, rubbing the skin above her collarbone. Andrew cupped her in his hands, teasing her until a sound like a sigh and moan left her lips that made his breathing quicken.

He lifted his head and smiled. “You like that?”

Sawyer nodded, not trusting her voice.

“Tell me what you want, Sawyer.” He moved his thumb in a slow, soft circle over the tip, making her arch up into his touch. “This?”

Her breath caught as his free hand repeated the action on her other breast. “Yes.” She hissed, rolling her hips into his.

A sexy rumble sounded in Andrew’s chest. She ground herself against his hardness again, and this time, his laugh died away. He lowered his head and caught her lips in a searing kiss while he gripped her hips and thrust his length against her core once, twice. They stayed that way, moving against each other as he kissed and nibbled down her throat to her breasts, until his mouth covered her nipple and teased a cry from her lips. Until every conscious thought dissolved into pressure and blinding white lights and her empty core clenched and pulsed. Until his grip on her hips was almost bruising and he shuddered above her.

Sawyer was lost in him, in the way he made her feel. She shimmied, trying to get him at her entrance. Andrew stilled, resting his forehead on her chest.

“Give me a sec,” he said, his breaths hot on her aching buds.

Her chest heaved. She thought he’d take some time to—well, she didn’t know—before getting the condom. Shit! How could she have been so stupid? Trying to get him inside her without it? She wasn’t on the pill. When she wasn’t having sex at all, birth control hadn’t really crossed her mind all that much.

While her mind raced, Andrew trailed a hand down her belly to her thigh. His fingers danced between her legs and she gasped at the first touch, jerking involuntarily. The intensity of his hands sliding in her folds was somehow more than just his erection. With two fingers, he caressed her sensitive flesh, stoking the flames. Teasing her. She didn’t notice him sliding down her body until she felt his hot breath where his fingers were. She was wet, so wet he slid through her folds with ease. A slow, fierce blush rose from her toes, and she was sure he could see it, even in the dim light.

“God, that’s perfect.” Andrew replaced his fingers with his tongue, making her cry out. “And that, too,” he said with laughter in his voice. 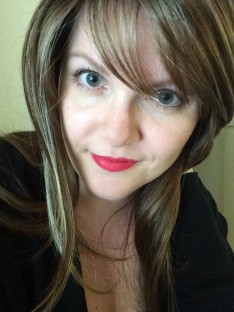 Alyse Raines was born in Canada, and now lives in Los Angeles. She writes romance, and her obsessions include vegan cooking, books, tea, sandals, turquoise jewelry, nail polish, and online shopping. Her debut NA contemp romance THE FUNDAMENTAL THEORY OF US is out now from Evernight.