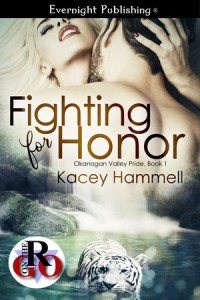 There’s only one rightful Alpha, and he’s back to claim his pride and his mate…

As the rightful Alpha of a unique pride of panthers, originally founded by his father, Dominic Stone followed his inherent solitary path to find peace and grieve the untimely demise of his dad. Five years later, he returns home ready to take his place, settle old debts and claim the one woman he’s always wanted as his.

Fighting for Honor may be a first for Kacey Hammell in a new genre, but within the pages, Kacey’s delectable story telling is on full display…a quick read that will leave you on the edge of your seat…Whether or not you’re a fan of shifter book won’t matter, because you’ll be too engrossed in this riveting story.” 5 Stars from Liz, Goodreads

Dominic let out a long, deep breath as he passed the sign welcoming him back to his hometown.

Despite his inherent instinct to remain solitary, it was time to return home.

Not exactly excited to be back but knowing it was unavoidable, he drew back on the throttle and accelerated down the open road. The tall trees and dense forest rushed by as he pushed on, his back aching some from being on his Honda Shadow for the last three days.

Five years since he’d been here and yet the route was just as familiar as if he’d ridden it yesterday.

The years had gone by slowly, yet also fast. Time hadn’t healed all his wounds from his father’s untimely death, but the twenty-seven-year-old young man Dominic once was had grown into a man. And he’d finally accepted that he was destined to be Alpha of the pride.

Though it was his rightful spot, he needed to ascertain the direction the vulnerable pride had taken, and whether or not his cousin would step aside without qualm.

The motorcycle lurched as he changed gears. Thinking of Kenneth right now was not the best avenue to take. He’d heard what his cousin had been up to recently, and the urge to wrap his hands around the little shit’s throat was strong.

He’d left the pride in Kenneth’s capable hands—so he thought—and all he’d done was take advantage of his position.

Being a class-A asshole did not breed a great leader.

Dominic didn’t know who he was more pissed off at—himself for asking Kenneth to help him out or Kenneth for being a fuck-up. The new awareness that he should have been more diligent of keeping tabs on the pride gnawed at his nerves.

Winding down the empty road, he couldn’t help admiring the beauty of the mountains around him.

The exquisite sight of the large, beautiful hills and valleys crawled into his heart, wrapping around his soul, and reminding him of all he’d left behind. The rich lands belonged to his family, to the pride, and had for many generations.

His father loved mountains, probably even more so than Dominic did. Thanks to years of exploration and adventure, Dominic knew every inch of the lands of his homeland.

His father, Drago, was the first Alpha ever in the pride of panthers. Although they tend to be a solitary animal, his father had rallied that they band together in the fashion of other cats and create a unified pride. In this day and age, his father had campaigned, we are too vulnerable alone. We need to unify and protect our kind from looming extinction.

Glancing down at his watch, he punched the motorcycle faster in order to make it in time. Today was a very important moment for him and his remaining family.

He was home for good. And come hell or high water, he’d make everything right again.

Dominic wanted to guide and counsel the pride in the same reverent manner his father had, but back then he hadn’t been prepared for his father’s death. He’d needed time on his own to grow and learn. To understand the true ways of the world and respect the pride’s new way of life.

Cresting the last hill, the local community hall came into view. Energy surged through his body at seeing the familiar building and surrounding businesses. He hadn’t truly realized how much he’d missed home until now.

Pulling into a parking spot, he shut down his bike and lifted his arms over his head. Stretching to the left and right, his muscles strained and twisted as he worked out the kinks of the last few days. Unbuckling his helmet, he pushed it up and off, and shook out his hair. He should probably consider a haircut soon, being as the curls bounced against his neck and itched over his ears.

He’d pulled off the highways regularly to clean up and catch a few hours of sleep in motels on the way. There hadn’t been much time for him to do a complete clean up so he’d have to do.

His cell phone vibrated in his front pocket. Withdrawing it, he checked the caller ID and immediately answered.

“Yeah,” his contact replied on the other end. “Confirming our meet later tonight. Still a go?”

“Fucking right. My cousin won’t know what hit him. You get me in and I’ll take care of the rest.” He clenched his fist around the handle bar. “I’d like to kill the prick right now.” Rage nearly choked him. Damn Kenneth for everything.

“I’m trying. Taking every ounce of willpower I have not to bust this shit wide open the minute I walk in there.”

“You can handle this. Gotta run, am staying out of sight. See you later.”

The call ended. Dominic drew in deep breaths and tried to clear his mind. He’d been trained in one of the most lethal professions out there. Adding his panther to the mix, his anger was boiling heavily. But he couldn’t go into the hall guns blazing. Not when there was so much at stake. The element of surprise was on his side.

Unzipping his leather jacket, he stood and lifted his right leg over the bike, stomping his feet on the cement and getting the circulation moving again. Glancing around the quiet, deserted streets, he breathed in the sweet scent of the lands around him. Dust, wheat from the neighboring fields a mile away, the burned coffee that no doubt came from the Lap It Up Diner down the street, and the sugary richness from the Dairy Barn Ice Cream Parlor on the other side.

Cocking his head, two additional scents caught him unaware. One wrapped him with joy and protection, his heart filling with happiness with the knowledge that his mother was nearby. He had only communicated with her through e-mail and when he’d asked her to come out West to see him for a few days. Today was her special day. He hoped she’d be as pleased to see him back home as he was to be here.

The other scent, however, set his nerves on edge and his breathing ragged. The only other woman who filled his heart with both happiness and uneasiness. She was out of his league, had always been, even though there were few places they’d gone over the years where they weren’t together.

She was his childhood friend, confidante, and also the woman he’d wanted to someday spend forever with. They’d kept their relationship under wraps in the past, but Dominic planned to change that as soon as he could.

Mom of three, Kacey lives her own happily ever after with her perfect hero in Ontario, Canada.