It’s my pleasure to have Raven McAllen on the blog today with her latest release!

It’s no secret that I fell into writing Regency romance by accident. And definitely no secret how much I love both the writing and the research. It’s so much easier these days, with search engines as well as very helpful librarians on our library van. (Once a week into the village and they get almost everything I ask for.) Once I decide I need information everything else gets forgotten about as I flit from one thing to another. Sometimes I end up nowhere near what I was looking for, but oh boy I’ve enjoyed it.

The idea for this series came about, strangely when I saw a stately home and it’s contents were threatened to be parted due to mismanagement over years and of course death duties.

I didn’t dwell on the death duty bit, but I’ve got an idea plotted around it…, but I did have a light bulb moment about someone with a fortune and someone without…

Of course, I didn’t know then that the fortune was said to be cursed.

That’s a free read from Evernight and me… www.evernightpublishing.com/compromised-by-raven-mcallan/

And no, they’re not paranormal…

They just have cursed treasure in them… 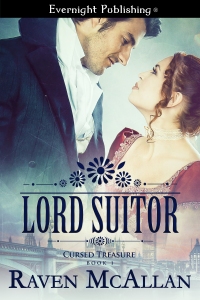 A smuggler and an aristocrat. Who should Tessa chose?

Both professed their love for her, both intrigued her. How could she pick one over the other?

When Tessa was accosted by a smuggler her life took a turn for the better. Or so she thought. Until Nathaniel, Lord Fenniston indicated his interest in her. She had to marry to help her family, but her loyalties are torn.

Either man could be the one, but how can she decide? Torn between them, Tessa must think hard and fast.

Luckily, fate has it’s own way of deciding, and Tessa had no option but to do as it dictates.

And a wee tease…

“You’ve gone and done it now, youngster. She be dead. How you goi’n t’splain that to his Lor’ship, eh?” The rough voice echoed and fluctuated like the sound of waves rushing in and out of one of the numerous caves in the cliffs below Birch House. Tessa took a sharp inward breath and winced as one of the drums of the local regiment played a brisk march on her skull. How dare they? She needed to sleep, not be entertained in such a manner.

“She’s not dead,” the smooth-as-her-morning-chocolate voice said. “I didn’t hit her that hard, a mere tap. Just to let the ponies get on. See, she’s still breathing, you fool. Look, her bosom is heaving like a ship under full sail.”

A ship under full sail indeed. She may be nicely endowed in that area, but not to those extremes. That picture in her mind conjured up Lady Frame, whose bosom was akin to his description.

Tessa moaned and struggled to sit up. Strong hands held her firmly.

“Don’t wriggle, woman. You may well do me a mischief if you do, and I swear you might not welcome the results.”

She stilled immediately as a distinct bulge made its presence known in the cleft of her arse.

Was it familiar? Tessa couldn’t get her thoughts straight enough to work that out.

“Come on, sweetheart, show us you’re back with us again.” Those strong arms—she had no reason to believe it was any other—gathered her up, and she felt safe and cossetted as a calloused hand stroked her cheek and then gave it a gentle tap. “Stop pretending.”

If she considered she was cosseted before, now she felt scolded like a recalcitrant child.

“Get you off, young sir.” The rough voice had become urgent. “Leave her with me. I’ll knock her out again and get away afore she comes around again.”

“Rubbish, enough of the violent thoughts. You go and do your bit, and I’ll speak to you tomorrow. She won’t see my face. The men need to know all is well, and you can reach them better than I can. I’ll do what is needed here. Off you go before my lady opens her eyes and clocks your ugly phizog. It might send her off again.”

There was a cackle of laughter, then a rustle and the fading sound of someone walking over what sounded like shingle.

“Come on now, I know you’re awake. Your breathing changed. Stop playing the dead man, and let’s get on.”

She bit her lip as she tried to open her eyes. They didn’t want to cooperate, and she suddenly realized why.

“Why am I blindfolded?” Was that weak and whinging voice really hers? “Take it off at once.” There, surely that sounded more in command?

It seemed not. Someone laughed.

“Sorry, sweetheart, nothing doing. It’s in your own best interest not to see anything. Look to the wall while the gentlemen do their work.”