Thanks for having me today! I’m delighted to be introducing my new MC romance series, Wild Blood MC, which kicks off with TANNER’S WAR. This is a whole new venture for me – I’ve beenr reading MC romances for a while, but I only recently gathered my nerve to try writing one. My usual fare as a writer is paranormal, and I had no idea if I could write anything else! But once Tanner and Beth popped into my head, I couldn’t stop thinking about them, and I knew I had to try getting their story written. And hey, I had loads of fun doing it! Hopefully it’s going to be just as much fun to read… 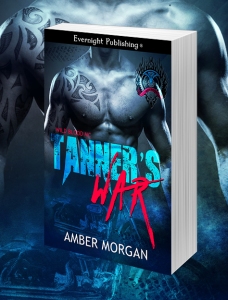 He’s not looking for trouble.

Tanner is fresh out of prison and trying to stay clean. His place in Wild Blood MC demands it. But when he nearly runs over a terrified woman, trouble finds him. Beth needs a savior and Tanner can’t say no.

Beth chose running over a forced marriage. She’s got nothing and nobody – until she meets Tanner. But with a fanatical cult leader hunting her, can she risk staying with the first man to defend her?

Tanner’s willing to put it all on the line for Beth – even his beloved MC. The fallout will change both their lives. 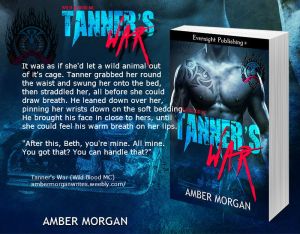 Amber is the secret identity of a writer who normally pens urban fantasy, but feels like stretching her wings. Amber loves darker romance, anti-heroes, good red wine, and expensive chocolate (sometimes all at once). She’s based in the UK and lives in an adorable cottage with her dream man and a demanding cat.

“What choice do I have? I’ve got nothing, nobody -“

He whirled round and grabbed her by the shoulders, pulling her hard against his chest. She gave a little gasp, staring up at him with wide, tear-filled eyes. “You’ve got me now,” he said, an unexpected fierceness rising in him. Before he could think better of it, he kissed her.

It was probably a mistake. But fuck, she felt good in his arms. She melted into him, opening herself to his possessive kiss and pressing her soft body against him eagerly. He wrapped his arms around her, lifting her off her feet in his need to get as much of her as possible. She tasted sweet and fresh, and his cock hardened as he wondered if her cunt tasted as good as her lips. The thought spurred him to kiss her harder, deeper, sweeping his tongue over hers, then biting her lip. She moaned – half pain, half encouragement, but the sound cut through some of Tanner’s blind lust.

“Shit,” he said, releasing her abruptly. “I shouldn’t have done that.”

Her face crumpled and he realized too late how callous that sounded. He thumped the wall with less force, and ran his hands over his face, trying to compose himself.

It wasn’t easy. His cock was throbbing and his whole body felt hot and tight, wired for action. Beth stared at him with a mixture of hope and shame on her face, and all he wanted to do was snatch her back into his arms and start kissing her again. For starters, anyway. Everything else wanted to do to her…Well, fuck. She probably hadn’t heard of half the things he wanted to do to her.

“Don’t you want me?” she asked, voice breaking.

Well shit. Of course he wanted her. Look at her. Sweet hips, hot tits, lush lips…Who wouldn’t want her? But not like this, with her drunk and vulnerable.

“I didn’t mean it like that,” he said, reaching for her. “I just mean, you’re…you know…And I’m…you know…” Shit. What was it about her that made him so damn tongue-tied?

“I don’t know,” she said, hugging herself again and turning away from him slightly. “Don’t do things like that if you don’t mean them.”

“I did mean it. It just probably wasn’t very appropriate.”

There was a touch of bitterness in Beth’s laugh that he didn’t like. “Do you always worry about what’s appropriate?”

“No,” he admitted. Well, this was going really fucking badly, wasn’t it? He laced his fingers behind his head and kicked at the scuffed boards on the porch, wishing he could go join the fights he knew were happening not far from here. Nash had him on probation though – no getting back in the cage until his actual probation was over. Tanner had tried to persuade him otherwise, but he’d realized that all his arguments made him sound like a teenager screaming you’re not my real dad and gave up out of embarrassment.

But fuck it, he needed to fight tonight. It was an itch under his skin that would just get hotter and hotter the more he ignored it. He was tuned up all wrong, what with finding Beth, laying out that creep at Mia’s, and now that kiss. It was either fight or fuck, and the only woman he wanted to fuck…He glanced at Beth. She looked torn between bolting and throwing herself at him. He could have her, he knew that. Their kiss told him that. She might be innocent and scared, but she was electric in his arms. It would be really fucking sick of him though, wouldn’t it? She’d been assaulted, sexually and physically, in the past twenty-four hours by men she’d known all her life. For Tanner to take her now, when she was hurting and vulnerable…Yeah. Not okay.

“Maybe I should go back to bed,” Beth said, running her fingers through her hair. “That beer’s hitting me pretty hard.” She managed a weak smile.

Tanner didn’t want her to go. He wanted her to stay out here, even if they did nothing, said nothing. He wanted to know she was right by his side, safe and…and his. He groaned. “Yeah,” he said, “please go to bed. If you stay out here, I’m going to do something really inappropriate.”